Hi everyone! I’m baaaaack! It’s been awhile since i’ve done a post here. The story is not a very interesting one. I broke a nail badly and had to wait until it grew back before I could swatch again.
But it finally grew back, and here I am, with shorter nails.
So awhile back I was at Marshalls, and I was excited to see this on the shelf. 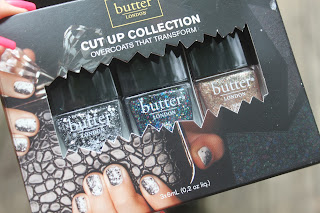 Marshalls and TJMaxx sometimes sell Butter Londons, but I'd never seen sets there before. They were selling for $8, so I quickly snapped it and I'm going to show you the polishes included here today!

So without further ado, here's the Butter London Cut Up collection!


First up is Dust Up, a polish with micro gold glitter and small copper glitter in a clear base. This one is the most dense out of the collection, but I don't think it could be quite opaque on its own. I used two coats over LA Colors Delicate for the photos. 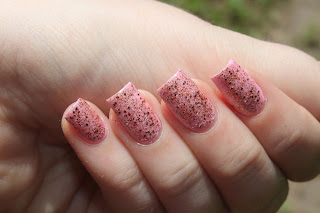 Next is Anorak, a polish with black and white hexes and silver and white shred glitters in a clear base. It looks pretty in the bottle and I thought it would be my favorite but then I put it on. The formula has some issues. It doesn’t go on smoothly, and you have to dab it on as you go. Sometimes even then its hard to get it to look even. The glitter clumps up or the base dries on the brush while you’re trying to dab it on and it smears. Yeah, i’m not terribly impressed considering that Butter London is a high end brand. This is what it looks like with patience. I used two-ish coats over a blue creme from Rue21. 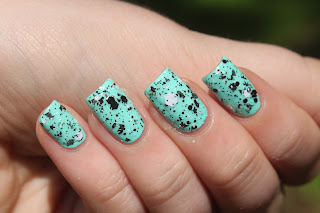 Last is Titchy, rainbow glitter with blue micro glitter in a clear base. This one also looked amazing in the bottle but was a bit of a let down on the nail. It didn’t have any formula problems it just didn’t really wow me. Maybe it was the shade of blue I used for the base. I don’t know. It was a bit hard to photograph, but I did my best. I layered it over Maybelline Dayglow Teal for the pictures. I used two coats on my middle and ring fingers and one on my pinky and index to show you the glitter pay off. 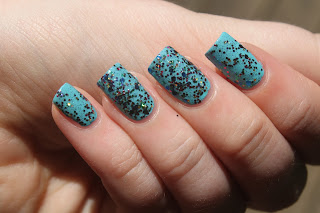 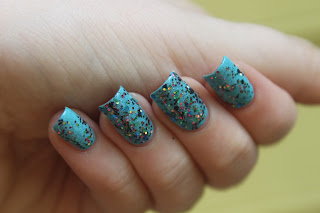 Overall, this collection is okay. Not good, not bad, just okay. If I had paid full price for it I would’ve been disappointed, but fortunately I only paid $8. So considering the price I got it for, i’d still say it was a pretty good deal. I’ll have to experiment with other base colors to see what looks best with them (particularly Dust Up).


Anyway, see you next time here on the blog! Happy Painting!
Posted by Unknown at 1:57 PM