Hey everyone! So  lately I finally decided to buy a polish that i've been wanting for forever..the Butter London matte topcoat. I've seen swatches of it and tried it in stores that have the testers (which is really awesome), and I loved it. I put off getting it because it's expensive and normally way out of my budget. But I got some money and found a good deal on ebay, so..now I have it! Of course, I had to try it out right away. I tried a bunch of different combinations with it and decided to pair it with some iridescent glitter. Iridescent glitters, along with flakies, are my favorite finishes ever. I especially love the way they look over black. So after taking a bit to choose which glitter to use, I came up with this. 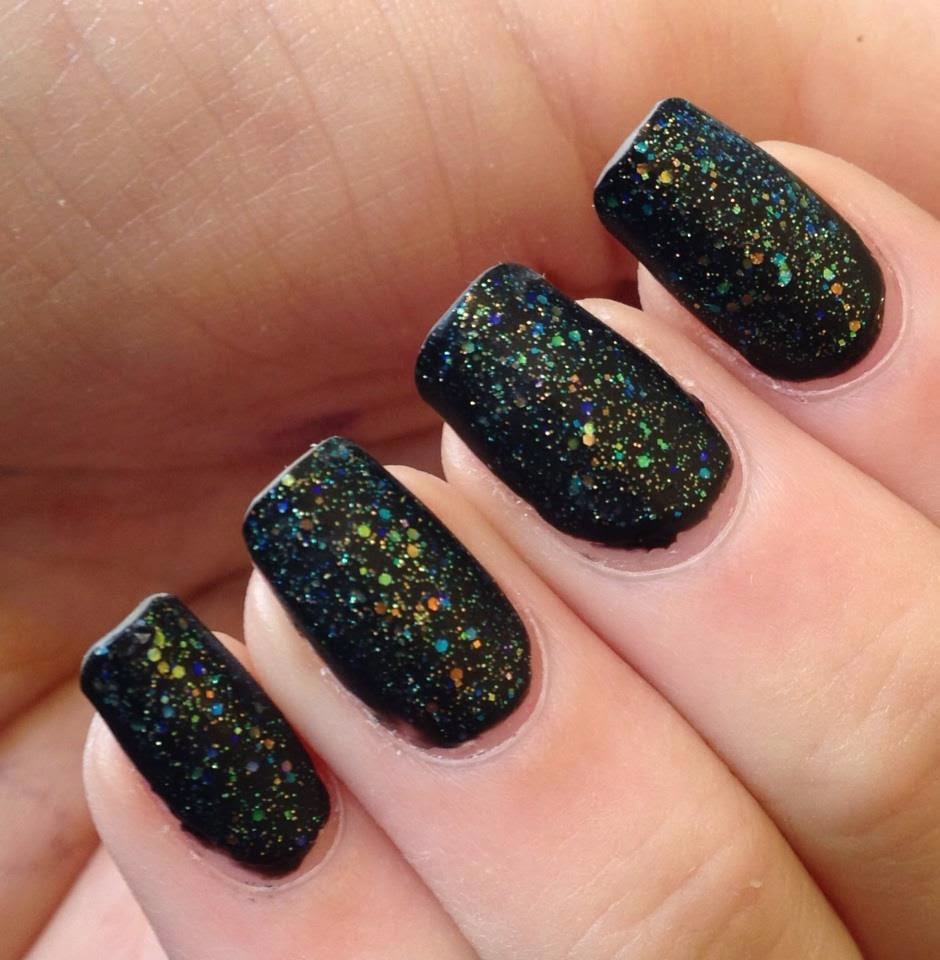 Sally Girl Dare U over Nuance Black Dahlia, mattified with the matte topcoat. By itself its a pretty mix of blue, green, and gold iridescent glitters in a light blue base. I love Sally Girl because they are so cheap and have some great colors. This is one of the old bottles, i'm not sure if this color is still available in the new ones. I was sad when they changed their bottles to be even smaller then they were. They only hold 4ml now. But hey, 99 cents is still a pretty good deal, and they're still bigger than the OPI minis.

So, what do think? Do you like iridescent glitters too?

Posted by Unknown at 3:56 PM No comments:

Email ThisBlogThis!Share to TwitterShare to FacebookShare to Pinterest
Labels: Layering, Purchased By Me

Hi everyone! Today I have for you a really gorgeous polish. From the brand Hard Candy! I'd seen this brand lots of times in Walmart and I've been anxious to try it! I love the colors and the look of the brand in general. I was really excited when I got two of them in a swap. I've swatched one of them for you now. 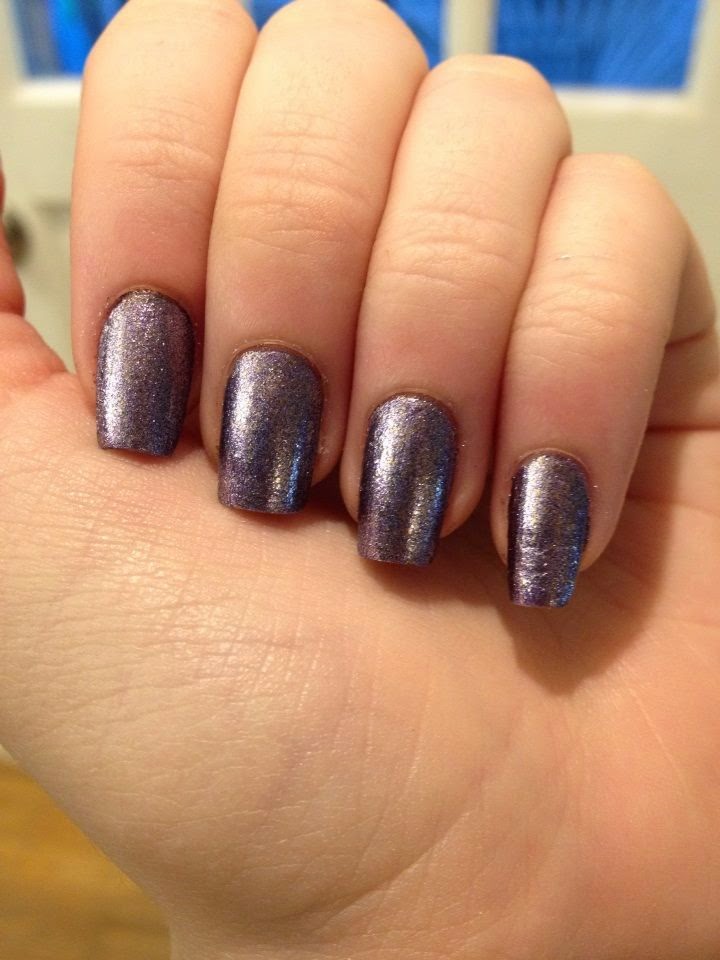 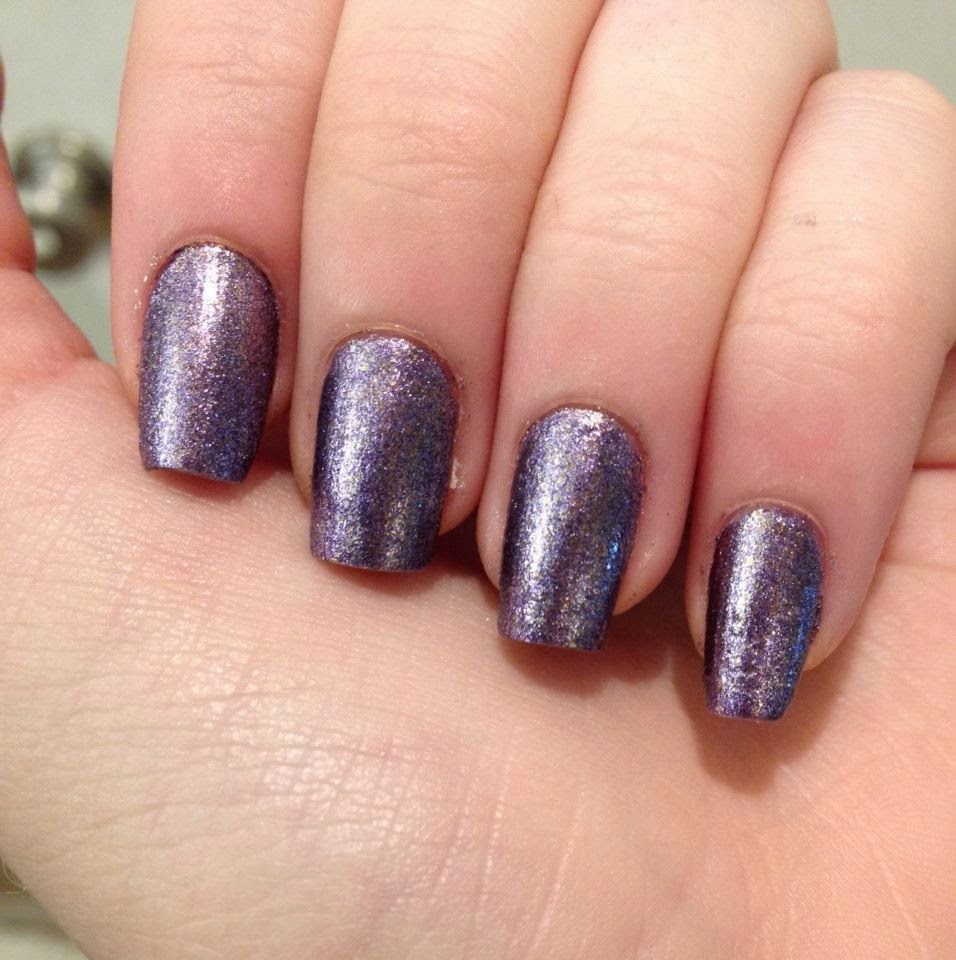 I love the complexity of it. The mix of gold in there makes the color really deep and unique. It’s funny, despite the gold, it looks more silvery in normal light. I love it. It’s a great fall color too. I think it fits with the season nicely, although i'm sure it would look great at other times of the year too.  The formula was also amazing. It went on opaque in two coats and dried nice and smooth. It also dries flat, as in there’s no thick layer on your nail. I put a pretty thick second coat by accident on one of my nails but it dried like I only used one coat.

Overall, I really like this polish, and for $3.99 each ill definitely be getting more at some point. My only complaint is that I wish the bottles were bigger. They’re only 7ml.

So what do you think? Do you like the Hard Candy brand? Let me know what you think! :)
Posted by Unknown at 9:56 AM No comments: